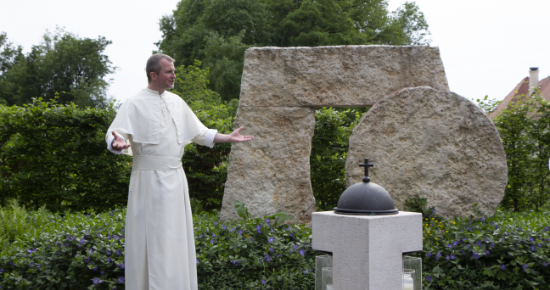 Fr. Gabriel Wolf, the Norbertine Order’s liaison to the Vatican connected to canonization, offers an update on the potential canonization of Norbertines who by character and/or works are deemed worthy of being declared saints.

Bl. Hroznata of Teplá (+ July 14, 1217)
The diocesan process for Bl. Hroznata, founder of Teplá/Chotěšov and the diocesan patron of Plzeň, opened on September 11, 2004; after 14 years it is still not closed. Only the report of the Historical Commission is lacking for this. As soon as the informative process on the diocesan level, together with a translation into Italian is finished, all the documents go to Rome, so that there under the direction of the relator, the positio super martyrio et fama martyrii, an historical critical life-description along with a theological synthesis can be composed. The new bishop of Pilsen, Msgr. Thomáš Holub, ordained on May 30, 2016, assured the Postulator that he would take the case further. The 800th anniversary of Bl. Hroznata’s death was festively celebrated on July 14, 2017 with a Premonstratensian Day in Teplá. The diocese also celebrated the jubilee in a worthy manner. Until now there is no sufficient miracle healing process under discussion. Vice-Postulator (since July 14, 2012): Abbot Philip Lobkowicz, O. Praem.

Bl. Bronislava of Cracow (+ August 29, 1259)
Since a medieval life description (vita) of Bl. Bronislava, who for centuries has been venerated especially in Poland and in the USA, is unfortunately lacking, the metropolitan of Cracow has still not responded to the letter of the Postulator of June 6, 2005 (supplex libellus) with the setting up of a tribunal for the diocesan process. Historians are searching further for a medieval Bronislava-Vita which is possibly not more recent than 1359 (100 years after her death). The stream of pilgrims to Cracow is unbroken, especially for her memorial day, on which a triduum is annually celebrated. Until now no satisfactory healing is available for a miracle process.
Vice-Postulator: Prioress Paula Torcynska, O. Praem.

Bl. Peter-Adrian Toulorge of Blanchelande (+ October 13, 1793)
The beatification of Peter-Adrian Toulorge on April 29, 2012 by Cardinal Angelo Amato in the Cathedral of Coutances was a significant event for the region. Every canonry received a DVD of the celebration sent by mail at the 1st liturgical memorial (October 13, 2013). A few days before the resignation of Benedict XVI, the Breve Apostolico of the beatification signed by Cardinal Tarcisio Bertone de mandato Summi Pontificis and marked with the papal seal was given to the Order. It was handwritten on parchment. The Postulator sent a translation of the Latin text in German, English and French to all the canonries as a pdf file. The canonry of Tehachapi had a new painting prepared; the canonry of De Pere had a wood carving done in the framework of its cycle of saints. The German speaking circary of the Order issued an 84 page edition of Communicantes with the title “In deine Hände lege ich mein Leben. Der Selige Petrus-Adrian Toulorge OPraem” (Into your hands I commend my life): Communicantes 27/2014. In this issue are found all the available texts in connection with the beatification including references by Bernard Ardura and Gabriel Wolf. Some canonries ordered banners of the painting of the beatification celebration in two sizes (1.50 x 1.00 and 0.75 x 1.00 m); these were sent at the time. The proper liturgy (liturgy of the hours: brief vita, second reading, responsory, prayer), which was approved on June 16, 2011 by the Congregatio de Culto Divino (Prot. N. 976/11) was sent to all the canonries by the Liturgical Commission in 2013 in 10 languages in addition to Latin. Furthermore, pilgrimages and memorial days are enjoying greater popularity. The new bishop of Coutances, Msgr. Laurent Le Boulc’h, whom the Postulator met on July 26, 2014, assured his support. He preached at the Memorial Day of the new blessed in 2017 at Muneville-le-Bingard. A new edition of the prayer card is not finished yet. Until now no satisfactory healing is available for a miracle process. Vice-Postulator (since October 8, 2017): Marc Beuve, President of the “Association of the Friends of Blessed Peter-Adrian Toulorge”.

Emily Podoska of Cracow (+ May 22, 1889)
Unfortunately no supplementary sources about her virtues (perhaps her work as a teacher at Zwierzyniec) can be found to continue the process in Rome. Therefore, the cause “rests” on the conclusion of the relator, Rev. Zdzislaw Kijas, OFMConv from the year 2011. On September 7, 2015 her birthplace, Grajów, celebrated the 170th birthday of the Servant of God; a small commemorative publication was produced with numerous pictures. In Cracow her grave tends to be visited. Until now there is no satisfactory healing for a miracle process. Vice-Postulator: Sr. Dorota Goldstrom, O. Praem.

Bl. James Kern of Geras (+ October 20, 1924)
The 90th anniversary of the priestly ordination of Bl. James Kern was celebrated by the Vice-Postulator, Evermod Fettinger, on July 1, 2012 (the day of his first Mass) as well as by the Postulator on October 19, 2012 in Geras and on October 20, 2012 in Vöcklabruck; “Radio Maria” broadcasted about a 20 minute catechesis in Stift Geras. The veneration was evident by the pilgrims in Geras as well as the fact that the majority of relic requests from all parts of the world were for James Kern, more than for St. Norbert. Until now there is not a satisfactory healing for a miracle process. Vice Postulator: Rev. Evermod Fettinger, O. Praem.

John Kieran/Eoin O’Mulkern of Lock Ce (+ November 21, 1580)
The former postulator, John Hanly PP in 1998 wrote an 1164 page documentation about the martyrdom of Archbishop Richard Creagh and 41 companions; 16 pages of the work, of which the protocol number is 114, is about the Premonstratensian Abbot Eoin O’Mulkern, called “John Kieran”. The group was separated from a case whose members were beatified on September 27, 1992. Archbishop Diarmund Martin of Dublin did not respond to a letter of Gabriel Wolf from February 4, 2013 in which the latter asked if the diocese is the actuator (actor) of the cause and would continue it. Judith Borer, who is the responsible protocollist of the Congregation, shared with Rev. Gabriel that the Postulator John Hanley died. In 2010 Rev. Daniel Ols, OP was named Relator of the cause in the Congregation but he has never made contact with a postulator of the “cause of Richard Creagh and Companions”. Oddly enough the two volume work of 1998 is not in the Congregation’s archive. There are many questions that remain which finally only the Diocese of Dublin could answer. After consultation with the Abbot General the Postulator will not pursue the cause further.

Henry Van Kasteren of Averbode (+ August 25, 1942)
Gerard Van Kasteren was born in Turnhout on July 22, 1881, entered the Abbey of Averbode in 1900 and received the name “Henricus”. After his profession in 1902 and his ordination to the priesthood in 1905 he went with four confreres to Brazil, where he taught in the Study Seminar of Pirapora as well as being superior institutorum of Averbode in Brazil (1936 until his death), as rector of the College of Jaú (1936-1941) and of the seminar of Pirapora (1941 until his death), as novice master and worked in the care of pilgrimages. He died in a tragic way on August 25, 1942 of a heart attack on the beach of Itanhaém after he had saved two seminarians caught in distress. The attempts to revive him were unsuccessful.
After talks and consultation with the Abbot General, the Postulator will not open the cause.

Paul Soucek and Companions of Nová Řiše (+ 1943 Auschwitz/Oświęcim)
The opening of a beatification process suggested at the General Chapter of 2012 for Abbot Paul Soucek and four of his confreres of the Canonry of Nová Řiše who lost their lives in the Concentration Camp at Auschwitz in 1943 was begun intensively: the appointment of Abbot Marian Kosík as Vice-Postulator on May 29, 2013, conversation with Bishop Vojtěch Cikrle of Brno on October 21, 2013, request in Rome for the transfer of competence from Cracow (Archbishopric of Auschwitz) to Brno on December 6, 2013, printing of holy cards in German, English, French and Czech, as well as annual days of prayer for beatification on Sunday after May 29, the day on which the confreres were transported from Nová Řiše. After collecting available material and above all consulting possible witnesses, the Vice-Postulator, Abbot Marian Kosík advised the Postulator at the Hroznata Feast 2017 not to open a diocesan process because the opinion among the people vis à vis Abbot Paul is not entirely favorable. Hence the Postulator, after consultation with the Abbot General, will not pursue the cause (martyr-process) further and will share this with the Bishop of Brno. Update: In October 2017 the healing of a man ill with cancer was reported; Father Gabriel at this point in time has no documentation at his disposal.

“Reflections of Saint Norbert after 900 Years”