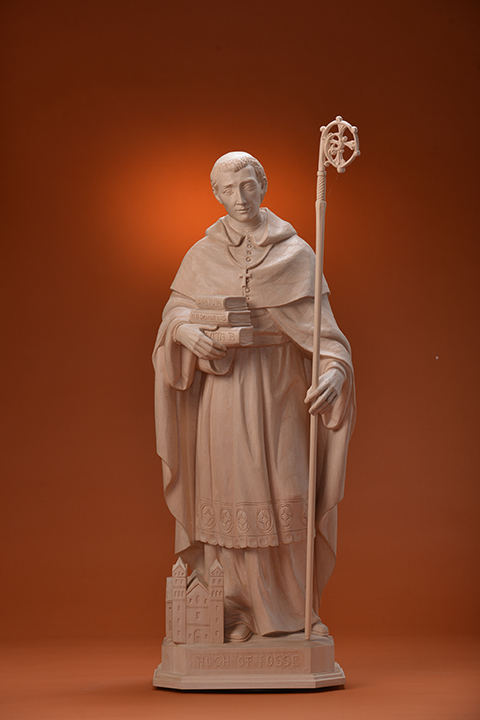 Hugh was born in Fosses-la-Ville toward the end of the 11th century. He became a cleric of the collegiate chapter of his hometown and later a court chaplain of Burchard, Bishop of Cambray.

Hugh met Norbert of Xanten in Valenciennes on March 26, 1119, and was so taken with his apostolic way of life that he decided to join him and became his first disciple. When Norbert was taken under the wing of the bishop of Laon after the Council of Rheims in 1119 at the request of Pope Callistus II, Hugh joined Bishop Burchard at Cambray again. Two years later in 1121, after the founding of Prémontré, Hugh returned to Norbert’s side and was named the first prior of the young community and became the “right hand” of Norbert.

After Norbert was appointed archbishop of Magdeburg in 1126, the confreres elected Hugh, at Norbert’s suggestion, to be the first abbot of Prémontré. He built the abbey church and the monastery. In order to preserve unity among the numerous foundations of Norbert, he called the superiors of the various houses to a meeting, out of which the General Chapter developed. He also compiled the first book of ceremonies with the liturgical directives of the order, and it is likely that he authored the ancient account of the life of Norbert, known today as “Vita Norberti B.”

Thanks to Hugh, an organizational structure was created, which made it possible for the order to last for centuries. He is honored as the first abbot general of the order. He played an essential role in the inner strengthening and rapid flourishing of the order. Under his guidance the number of the monasteries grew to 120.

As a superior, Hugh was mild and humble of heart but also very persistent. For 38 years, he was the father of his community and the guarantor of the unity of the order. Hugh died on February 10, 1164, and was buried in the abbey church in front of the altar of St. Andrew. Under Abbot General Egidius Biervliet, his remains were transferred to the front of the main altar in the abbey church in 1279. Abbot General Lescellier greatly embellished the tomb of Blessed Hugh in 1660.

After the suppression of Prémontré during the French Revolution, Hugh’s relics were transferred to Bassoles. Then, during WWI (from 1914 to 1918), they were kept in the cathedral of Laon, and from there were taken to the sacristy of the church of Brancourt. Because Brancourt was heavily damaged in the bombardments, the bishop of Soissons asked Prior Franken of Bois-Seigneur-Isaac to take the relics into his care. In 1922, Blessed Hugh’s remains were solemnly transferred to Bois-Seigneur-Isaac, where they rest to this day. Pope Pius XI confirmed the cult of Blessed Hugh on July 13, 1927.

Almighty eternal God, who are always calling new men so that they might make Your way known to others, we humbly entreat You through the merits and intercession of Your abbot Blessed Hugh, that by praying and working, we may build up Your people into one. We ask this through our Lord Jesus Christ, Your Son, Who lives and reigns with You in the unity of the Holy Spirit, one God forever and ever. Amen.
Close Menu