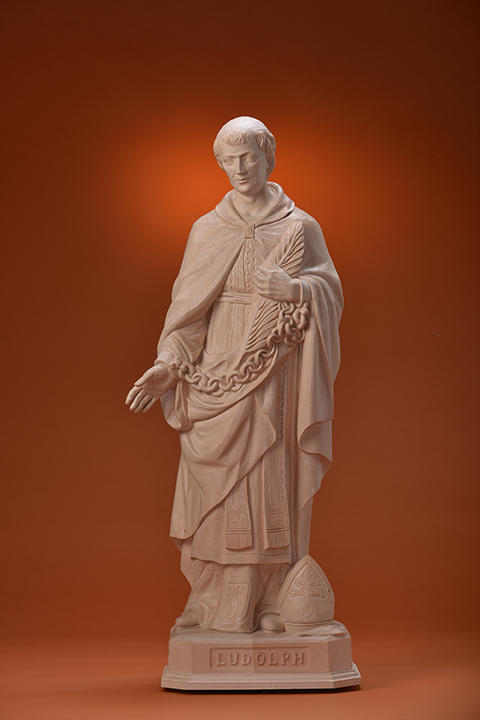 Ludolph was a Norbertine canon at the cathedral of Ratzeburg, where for a time he held the office of provisor. He was elected bishop of Ratzeburg in 1236. He led such a strict religious life with his confreres in the shadow of the cathedral that his community was nicknamed the “prison of the order.”

Like a good shepherd he focused all his energies on the care of souls. He preached and made pastoral visitations. The pope entrusted him with several political missions. His most difficult trial as bishop involved standing up to the civil authorities: Ludolph was forced to fight for the rights and freedom of the Church. Prince Albert of Sachsen-Lauenburg, the “Bear of Saxony,” took possession of properties belonging to the cathedral, an act which Ludolph resisted. Insults and threats would not intimidate him. Albert consequently ordered Ludolph thrown into the dungeon, where he had to suffer severe torture. Realizing that his treatment of the bishop was unpopular, the prince decided to set Ludolph free. After his release from prison, Ludolph was brought half dead to Prince John of Mecklenburg and taken to the Franciscans at Wismar where he died a few days later on March 29, 1250.

After his death, numerous favors received were reported by those who visited his grave in the Cathedral of Ratzeburg. Ludolph is venerated as a “martyr for the freedom of the Church.” At the request of the confreres of Lorraine and Hohenburg, and of the Procurator General Norbert Mattens, the centuries-old veneration of St. Ludolph was confirmed and extended to the whole order by Pope Benedict XIII on March 20/April 12, 1728. The head of Ludolph was kept in the possession of the Norbertine nuns of Meer beginning in the 17th century. After the secularization of this convent, it came into the possession of Karl Albert von Beyer, the last abbot of Hamborn. Von Beyer in turn bequeathed the relic to the abbey of Averbode before 1842. On August 30, 1970, St. Ludolph’s head was returned to Hamborn. Because Ratzeburg is in the diocese of Hamburg, founded in 1995, the three holy bishops, Evermode, Isfrid and Ludolph, were transferred from the calendar of the diocese of Osnabrück to that of the archdiocese of Hamburg.

Lord God, who made St. Ludolph, bishop and martyr, a faithful herald of Your name, grant, we beseech You, that following in his footsteps, we may persevere untiringly in preaching Your Gospel to all and in building up the kingdom of Your charity. We ask this through our Lord Jesus Christ, Your Son, Who lives and reigns with You in the unity of the Holy Spirit, one God forever and ever. Amen.
Close Menu