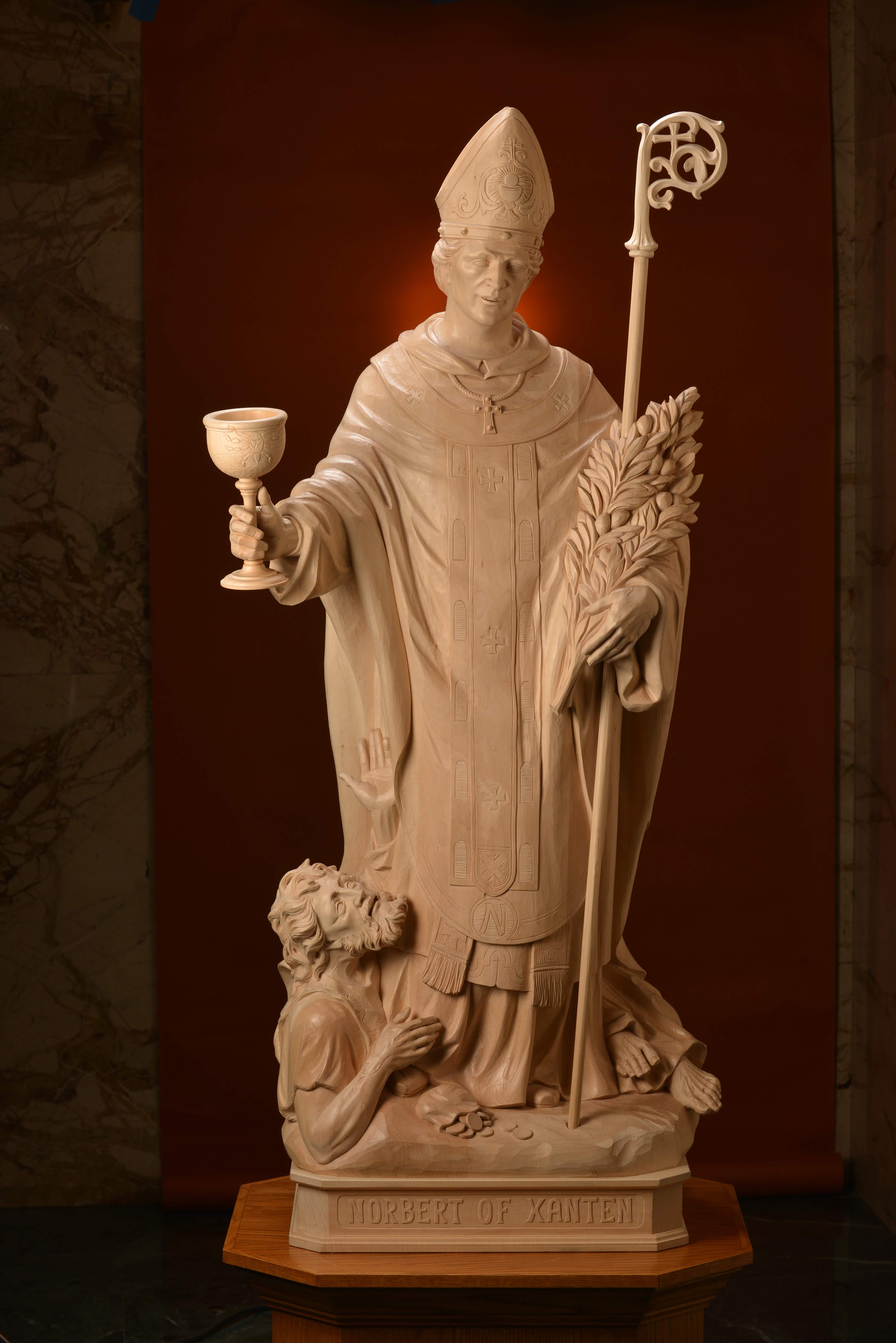 Norbert of Gennep was born around 1080. He was a secular canon at St. Victor’s Collegiate Church in Xanten and was ordained subdeacon without making an effort to live the clerical life. Somewhere between 1108 and 1109, he became chaplain at the court of Archbishop Frederick of Cologne, and already in 1110 he was a chaplain at the court of Emperor Henry V. He accompanied the latter to Rome in 1111 where there was great turmoil on account of the question of investiture.

Norbert returned to Germany very troubled. In 1113, he declined to accept the diocese of Cambray from the emperor.
In the spring of 1115, while riding to the village of Freden, he was thrown from his horse during a sudden thunderstorm. This event gave Norbert the impetus to change his way of life. He gave up his chaplaincy at the court and dedicated himself to meditation, under the direction of Conon, the reform-minded abbot of Siegburg. Finally, in December 1115, he was ordained deacon and priest on the same day. Before the ordination, he took off his expensive clothes and put on a humble sheepskin garment. Immediately after the ordination, he returned to Siegburg where he spent 40 days in prayer. He celebrated his first Mass at Xanten, where he informed the canons of St. Victor that he had a reform of the community in mind. However, his fellow-canons did not want to hear of it. Experiencing this rejection, Norbert withdrew and continued seeking advice from other reform-minded clerics, including a hermit named Ludolph, and the canons regular of Klosterrath at Rolduc.

After this he began his journey as a wandering preacher. Some admired his actions while others became perturbed and irritated. Norbert consequently had to justify himself at the Council of Fritzlar, where he decided to relinquish everything and resign his canonical title and all his benefices. He then started to lead the life of a pilgrim. In St. Giles in Provence, he was received in audience by Pope Gelasius II, from whom he received permission to work as an itinerant preacher. During the winter he went barefoot to Valenciennes, where two of his companions died of exhaustion and where he met Bishop Burchard of Cambray, his old friend at the imperial court. The chaplain of the bishop, Hugh of Fosse, was so impressed by Norbert that he asked to be allowed to join him.

Norbert attended the Council of Rheims in 1119, where the new pope, Callixtus II, asked his nephew, Bishop Bartholomew of Laon, to take Norbert under his protection. Norbert used this occasion to visit the famous cathedral school in Laon. At the request of the pope, he agreed to reform the chapter of St. Martin. However, this attempt of his was as unsuccessful as that of a few years back in Xanten. The bishop recommended that he look for a place in his diocese where he could settle. He chose the solitary valley of Prémontré, even though he continued his preaching apostolate. On one such occasion, Evermode of Cambray and Anthony of Nivelles followed him. After a sermon in Laon, seven young men joined him.

At Easter 1120, they all settled in Prémontré, where they were now 14. They chose the Rule of St. Augustine and considered themselves canons regular. On Christmas Day 1121, 30 men professed their solemn vows. They promised to live according to the counsel of the apostles, inspired by the apostolic community of Jerusalem, and they lived according to the spirit of the Gregorian Reform. They chose white unbleached wool for their religious garment instead of the usual black. Norbert justified this choice by the example of the angelic witnesses of the resurrection who were clothed in white. The celebration of the Mass was the center of the day. They had a special devotion to the Blessed Virgin, who was chosen patroness of their church. Beside the canons, a great number of lay brothers and sisters lived at Prémontré. They took care of the hospice, which Norbert established for the pilgrims and the poor. All these contributed to the reform of the Church.

After handing over the leadership of the community to Prior Hugh, Norbert went again on his journey of preaching. Before Christmas 1121, he went to Cologne to obtain relics for his new foundation. On his return journey, he promised the Count of Namur to establish an abbey in Floreffe. In the year 1123, Norbert was in Westphalia where Count Godfrey of Cappenberg gave him his castle to establish a monastery. Cappenberg was to be the first Norbertine monastery in German territory. At the request of Burchard of Cambray, Norbert went to Antwerp to preach against Tanchelm. There he founded the abbey of St. Michael. In 1125 he made a pilgrimage to Rome where he received papal confirmation for eight monasteries.

In 1126, the emperor called an Imperial Diet in Speyer to fill the vacant See of Magdeburg. Norbert was also invited. He was elected Archbishop of Magdeburg and he entered his episcopal city barefoot and in penitential attire on July 18, 1126. But as a bishop he had to make adjustments to his way of life. In his new position he had to put an end to abuses and to nullify the illegal sales of church property. Norbert began the task without delay or hesitation. His priority was the reform of the clergy. He brought confreres from Prémontré to Magdeburg and entrusted them with the Church of Our Lady. He also founded Norbertine monasteries in Pöhlde and Gottesgnaden. As shepherd of a diocese on the frontier of a great missionary territory, he geared his confreres toward the work of care for souls more than he had at Prémontré.

During his eight years as bishop, he could not accomplish all his plans. After his death, his confreres continued to labor for the conversion of the pagan Wends. In his last years, he was engaged in political activities in the service of the Church and the emperor. He was instrumental in restoring the peace between Emperor Lothar III and Pope Innocent II. He proved himself a stout defender of Pope Innocent against the antipope Anacletus. As chancellor of the empire, he accompanied Lothar to his coronation in Rome.

After returning to Germany, Norbert became seriously ill in Goslar. He was taken to Magdeburg where he lived three more months. He was able to bless the oils on Holy Thursday, but on Easter Sunday he could only celebrate the Mass sitting. The founder of the Norbertine Order, Norbert of Xanten, died June 6, 1134. He was buried in Magdeburg in the church of the Monastery of Our Lady at the altar of the Holy Cross. A few years later he was transferred to the choir. Pope Gregory XII canonized him on July 28, 1626. Magdeburg later came into the hands of the Protestants. The relics of St. Norbert were transferred through the efforts of Abbot von Questemberg in 1626 and later placed in a magnificent chapel in the abbey church of Strahov in Prague.

O God, who made our holy Father Norbert, Your faithful pastor, an outstanding herald of Your word and through him have called many to a conversion of ways: grant, we beseech You, that with the support of his merits and with Your help, we may imitate what he taught in word and in deed. We ask this through our Lord Jesus Christ, Your Son, Who lives and reigns with You in the unity of the Holy Spirit, one God forever and ever. Amen.
Close Menu