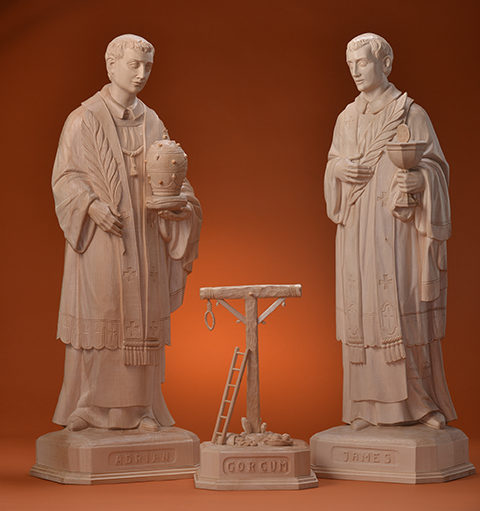 On July 9, 1572, the Calvinists hanged 19 priests and religious in Gorcum on account of their loyalty to the Catholic faith. Among these were two sons of St. Norbert, Adrian and James.

Adrian Jansen (sometimes called Becan after his place of birth) was born at Hilvarenbeek in 1529 and entered the abbey of Middelburg at the age of 15. After a stint as master of novices and chaplain, he was appointed pastor of Agterkerke in 1560 and of Munster in 1572. Adrian was an exemplary priest and a true apostle, laboring in a parish which already counted several Calvinists among its population.

James Lacops, also a canon of Middelburg, was born at Oudenaarde in 1542. He was an intelligent and charming young man whose success went to his head. His religious life was mediocre. When the iconoclastic Calvinists infiltrated the abbey in 1566, the 24-year-old James renounced his faith together with two others. His father and his brother, who also was a Norbertine, eventually brought him to reconsider. Touched by the grace of God, he returned to the abbey and was kindly received by the community when he asked forgiveness for his apostasy. Among other things, he had gone so far as to write a pamphlet attacking the Church and had become a preacher of the Calvinist beliefs. His abbot sent him to the abbey of Mariëweerd for a prolonged period of penance. At the end of five years, the abbot appointed him curate in Munster where his brother was currently pastor. After the death of his brother in 1572, Adrian Jansen was appointed pastor. 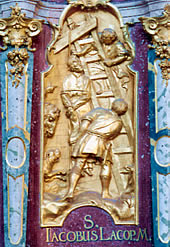 Adrian had only been there three months when revolutionary soldiers attacked the rectory and captured both priests in July 1572. Together with 17 other priests and religious, they were marched through the streets while beaten and insulted, accompanied by a screaming mob. Along the way the soldiers offered local fishermen to set the priests free in exchange for a cask of beer, an offer which the highly Calvinistic locals refused. The 19 priests and religious were thrown into prison and subjected to a trial during which they defended the doctrine of the Eucharist and the authority of the Successor of Peter. Although Adrian was more experienced in refuting the arguments of the heretics, it was now James, with his gift for speaking, who took the lead in arguing with their captors. They were mistreated, tortured, and denied food. On July 9, 1572, both Adrian and James, together with the other 17 priests and religious, were hanged from the rafters of a barn at Gorcum and received the crown of martyrdom. Adrian was 43 and James 30. They were beatified by Pope Clement X on November 24, 1675, and canonized by Blessed Pius IX on June 29, 1867.

Lord, our God, who caused Your holy martyrs Adrian, James, and their companions to persevere to the end; make us remain in You in faith and charity and pursue the unity of the Church. We ask this through our Lord Jesus Christ, Your Son, Who lives and reigns with You in the unity of the Holy Spirit, one God forever and ever. Amen.
Close Menu