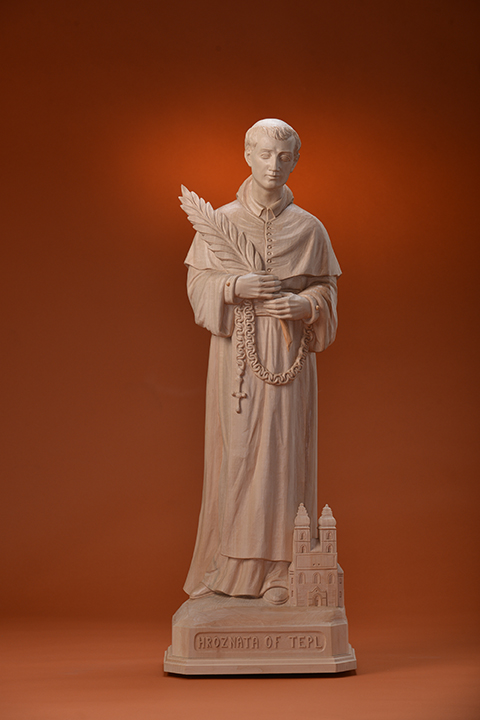 The Czech nobleman Hroznata was born around 1170 and received after the early death of his father a good education at Krakow, where his sister, Woyslawa, was the wife of the prefect of the city. The young talented man married but soon lost his wife and his son. In place of a legal heir he founded the monastery of Teplá as his spiritual heir in 1193.

When the papal legate encouraged the knights to participate in the crusades, Hroznata promised to go to the Holy Land in order to liberate the holy places. He made the journey with the crusaders to Brindisi and passed through Rome, where the pope confirmed the foundation of Teplá. Since the crusade failed in 1197 the pope dispensed Hroznata from his vow concerning the crusades on his way back from Southern Italy and encouraged him to found a sister monastery. Together with his widowed sister he established a cloister for nuns in Chotešov around 1202. Hroznata even becomes a religious in Teplá.

The traditions relay that he was clothed at Rome by Pope Innocent III in the white habit of the Norbertine Order. Because of his expertise in a variety of areas, Abbot John appointed him substitute and administrator of the monastery properties. With all his strength, Hroznata fought for the cause of the abbey. His efforts were a thorn in the side for the enemies of the monastery. Hroznata was captured and imprisoned in 1217. Because he refused to allow the abbey to pay his ransom, his captors let him die of hunger in prison.

After his death, the confreres of Teplá were able to secure his body and buried it in the abbey church in front of the high altar. He is honored as a “saint” because of his love of neighbor, his humility and his martyrdom. His relics were exhumed and placed in a precious reliquary in the new Hroznata chapel. Already in the 13th century the vita fratris Hroznatae had been written. Pope Leo XIII confirmed his veneration as “blessed” on September 16, 1897, and 100 years later, Pope John Paul II declared him patron of the newly erected Czech diocese of Plzen on March 3, 1997. The Order now looks forward to his canonization.

Lord God, who called Your holy martyr Hroznata to be a follower of Christ crucified, make us able, we beseech You, to deny ourselves and so to enter into the glory of Our Lord Jesus Christ, Your Son, Who lives and reigns with You in the unity of the Holy Spirit, one God forever and ever. Amen.
Close Menu