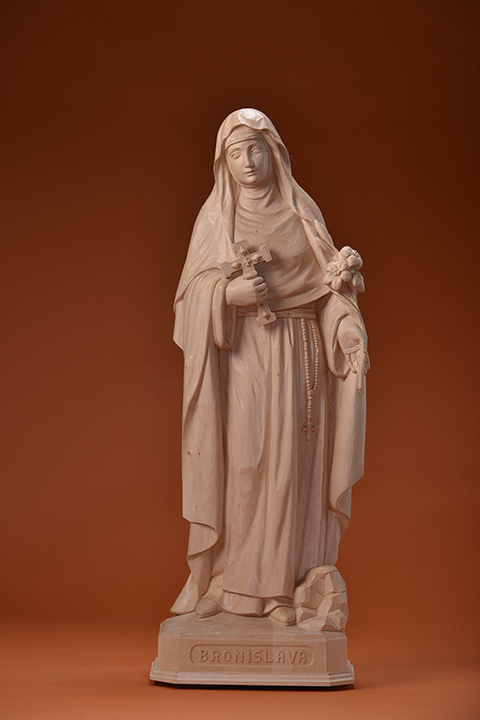 Bronislava was born at the castle of Kamien in Upper Silesia in 1203. Her family was of Polish origin and was devoted to the Gregorian reform movement. She grew up in an atmosphere deeply influenced by the Crusades, and devotion to the Holy Cross would characterize her entire life.

She was 16 years old when she entered the cloister of the Norbertine nuns at Zwierzyniec in Krakow, a convent founded by her maternal grandfather. Bronislava’s devout prayer, her meditation on the Passion of Christ, and her veneration of the Holy Cross left a deep impression on her contemporaries. When the Tartars invaded Krakow in 1241, Bronislava, holding the cross in her hand, encouraged her sisters with the words, “Do not be afraid, the cross will save us.” The barbarians left behind a track of misery. In the same year, the pestilence also ravaged this region. In every difficult challenge, Bronislava, supported by her sisters, was an “angel of consolation” to the people in their need. The population considered her their patroness on whom they could count when they needed protection. Her help and protection was the cross, and she is therefore often represented as praying before Jesus Crucified.

During her grave afflictions, she withdrew to the solitude of the hill of Sikornik where she entrusted her troubles and the troubles of her fellow men to the mercy of God. She saw her cousin, the Dominican St. Hyacinth, in a vision at the time of his death on August 15, 1257, as he went to heaven holding the hand of the Blessed Virgin.

Bronislava died on August 29, 1259. Her body was taken to the convent church and she was invoked as a saint. Her relics were placed in a precious reliquary and were carried in solemn procession each year on the anniversary of her death. Pope Gregory XVI declared her blessed on August 23, 1839. The efforts of the Polish bishops toward the canonization of Bronislava in 1947 at Pope Pius XII were delayed by 40 years of Communist rule.

Almighty, eternal God. You call those who are weak in this world, to confound those who are strong. Help us, through the intercession of Blessed Bronislava, so that, notwithstanding our weaknesses, we may cooperate in the building of Your kingdom. Through Jesus Christ, our Lord. Amen.
Close Menu