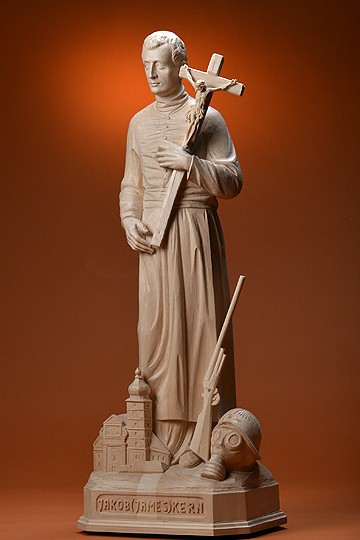 Francis Alexander Kern was born in Vienna on April 16, 1897. As a small boy he manifested a strong desire to become a priest. At age 11, the intellectually gifted Francis enrolled in the Minor Seminary in Hollabrunn, where he liked to spend his free time in prayer before the Blessed Sacrament. He was 14 years old when he made a vow of perpetual chastity. During WWI, shortly after completing his secondary studies in 1915, he enlisted as a volunteer in the army. Even as a soldier he continued his daily adoration before the Blessed Sacrament. On January 1, 1916, during the 40 hours devotion in the church of St. Blase in Salzburg, he asked God to be allowed to suffer in union with His Son, Jesus Christ. His request was soon granted and he was sent to the Italian Front as a lieutenant.

In September 1916, a bullet pierced his lung and caused a wound from which he would never fully recover. He entered the seminary of the archdiocese of Vienna as a convalescent. About this time, a group of Catholics in the Czech Republic separated themselves from Rome and founded the schismatic Czech National Church. Isidore Bogdan Zaradnik, a Norbertine canon of Strahov and a doctor of philosophy, also fell away and became a leader of the schism. In this capacity, Isadore came to Vienna to agitate against Rome. James was deeply shocked by all this and decided to offer himself in atonement for Isidore. Pope John Paul II would later say, “In this sad event, James Kern discovered his vocation. He desired to be the propitiatory sacrifice for this fallen-away religious. In a manner of speaking, James Kern entered the Norbertine abbey of Geras to replace him in the Order. And God accepted the gift of the ‘substitute.’” On October 18, 1920, he received the white habit of St. Norbert and the religious name “James” (after the Norbertine martyr St. James Lacoupe).

Having been put to the test by sufferings during his time in the army and from his war injury, James took religious life very seriously. His piety, however, was not always understood and appreciated by his confreres. James was a faithful and happy novice and professed his temporary vows in 1921. His abbot wrote of him that, “Consecrated to the Sacred Heart, he fosters the idea of reparation.” Through an indult given in view of his poor health, he was permitted to be ordained a priest on July 23, 1922, and the great desire of his childhood was finally realized. Nevertheless, at his first Mass he said, “This Palm Sunday will be followed by Good Friday.” His sermons came from the heart and moved his listeners. Because of his weak health, his priestly ministry was limited to the abbey and the neighboring parishes.

In 1923, some of his ribs had to be removed using only a local anesthetic, and his Way of the Cross began. He spent a few months in Meran to recuperate, but after returning to Geras, his condition grew worse and he had to be very careful. His last sermon, preached on the occasion of the bishop’s jubilee, bore the title, “A man of the Church, loyal to the bishop.” Eventually he had to be taken again to the hospital where he suffered greatly because he refused to take painkillers. On October 20, the day he was slated to make his solemn profession of vows in the Order, he underwent another surgery. Before the operation he said, “Tomorrow I will see the Mother of God and my Guardian Angel.” He asked that his white habit be prepared and everything made ready for Holy Communion, saying, “The last Communion should be as special and solemn as the first.” The hospital chaplain gave him the last Sacraments during the long surgery and blessed him for the final leg of his journey to the Heavenly Father. James Kern died on October 20, 1924, at the ringing of the Angelus bell at noon.

The faithful did not forget the “good Father James.” They came to his grave in Geras to pray and to ask for his intercession. Pope John Paul II beatified James Kern on June 21, 1998, at Vienna’s Heldenplatz (“Heroes’ Square”). More than 100 Norbertines joined the thousands of priests and faithful present for this celebration, during which the Pope encouraged priests to follow this “hero of the Church” and remain faithful to their vocation.

God, who gave Your priest Blessed James a zeal for perfection and the patience to cling to You alone in infirmities; grant, that strengthened by his intercession, we may go forth in the way of love rejoicing in the Spirit. We ask this through our Lord Jesus Christ, Your Son, Who lives and reigns with You in the unity of the Holy Spirit, one God forever and ever. Amen.
Close Menu