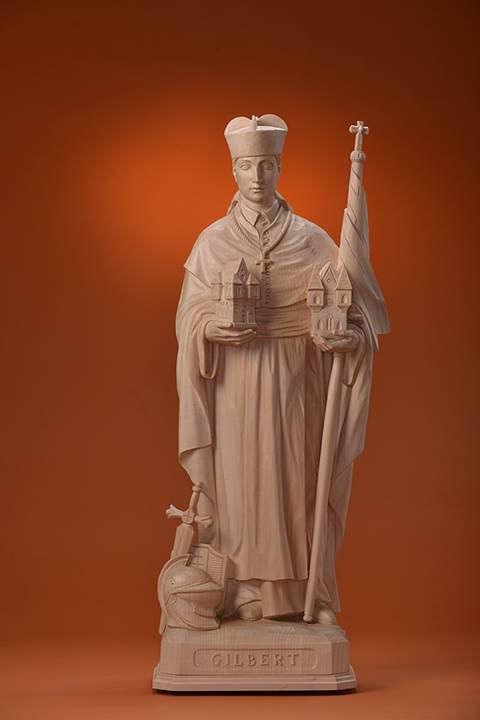 The knight Gilbert belonged to the high nobility of Auvergne. Following the advice of Ornifius, the Norbertine abbot of Dilo, he participated in the Second Crusade (1147-1149), which was preached by St. Bernard at Vezelay and led by the French king, Louis VII. This crusade ended in military disaster. Having survived this dangerous endeavor, Gilbert decided, together with his wife, Petronilla, and his daughter, Ponzia, to dedicate himself to God and enter the monastic life. He distributed a portion of his considerable wealth to the poor and also founded a convent, which his wife and daughter entered. At first, Gilbert himself lived as a hermit. After completing his novitiate in the Norbertine abbey of Dilo, he founded the abbey of Neuffontaines around 1150 and became its first abbot. Following the example of St. Norbert, he also built a hospital attached to the abbey, which soon became famous because of the many miracles that occurred there.

Penitent and filled with compassion, he cared for a great number of sick and sinful people, whom he wished to heal both spiritually and physically. Children with severe sickness were brought to him from all over. He laid his hands on them and gave them back to their parents healed. This gave rise to the later custom of parents bringing their sick children to Neuffontaines, clothed in white, seeking the intercession of St. Gilbert for healing.

Gilbert died on June 5, 1152, consumed by penance and hard work. He had expressed his desire to be buried in the cemetery of the poor who died at the abbey. But because of the many miracles which God worked through his intercession his earthly remains were eventually transferred to the abbey church of Neuffontaines and, after being lost for a time, were later rediscovered in the abbey in October 1645. The relics were transferred for greater safety to St. Didier in 1791 and, nevertheless, were lost during the tumult of the French Revolution. St. Gilbert’s feast day (October 26) falls on the anniversary of his translation of the 17th century. Pope Benedict XIII confirmed the veneration of St. Gilbert on January 22/March 8, 1728.

God, who called Your abbot St. Gilbert away from the riches of the world, so that he might enter into the way of poverty, grant, we beseech You, that entering into the way of humility, we may strive to serve our brothers. We ask this through our Lord Jesus Christ, Your Son, Who lives and reigns with You in the unity of the Holy Spirit, one God forever and ever. Amen.
Close Menu