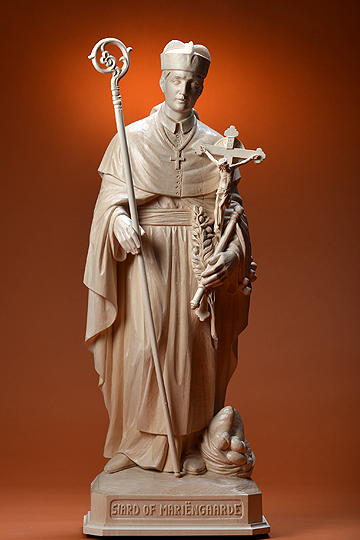 Siard was born of a Frieslanden noble family. He studied in the abbey school of Mariëngaarde, where St. Frederick was abbot at the time. He asked for admission to the novitiate in 1175. After 20 years of religious life, he was elected the fifth abbot of Mariëngaarde in 1194. Nothing in his daily life distinguished him from his confreres. He wore the same habit, ate at the same table, and slept in the same dormitory. On account of his exceptional humility, he resolutely refused everything that was not strictly necessary. He was a good administrator who governed his monastery well, both in spiritual and material matters. The apostolic spirit of the order thrived at Mariëngaarde under his leadership. Whenever Siard went on a journey, he took along a large basket full of bread and other foods that he could distribute among the poor. Because of this he is usually depicted with a basket at his feet. He had the gift of appeasing hatred and reconciling enemies. He urged three things upon the confreres who had to leave the monastery: a joyous departure, a peaceful sojourn, and a happy return.

Siard had a special devotion to Martha and Mary. He looked to Martha as an example for his care of the confreres and to Mary as a reminder of the necessity of listening to Christ in prayer and meditation. Siard worked side by side with his confreres during the periods of manual labor, especially in the fields. He would lead the confreres in the singing of Psalms during harvest time. Occasionally, he would fall into ecstasy during prayer and hear the heavenly music of the angels.

He had been abbot for 36 years when he died on November 14, 1230. Numerous faithful were granted special favors by God at his grave. After the destruction of Mariëngaarde by the Calvinists in 1578, his earthly remains were rescued by a Frieslanden nobleman, Siard of Helsema, who brought them to Hildesheim. In 1608, his relics were divided and placed in two separate reliquaries. One of these was brought to the abbey of St. Feuillin du Roeulz in 1617. After the suppression of this abbey during the French Revolution, the relics were taken to the church at Strépy. In 1938, Prelate Bauwens brought them to the Norbertine abbey of Leffe. The other reliquary was brought to Tongerlo in 1617, where ever since the people have held St. Siard in great honor and celebrated his feast each year with great solemnity. A part of the relic of Siard’s head found a home in the Generalate House in Rome, until 2000 when it was transferred to the abbey of Windberg. The cult of St. Siard was confirmed by Pope Benedict XIII on January 22/March 8, 1728.

God, who made Your saints to obey the Gospel as an example for many; grant, we beseech You, that we may imitate the cheerful goodness and devout piety of the blessed abbot Siard. We ask this through our Lord Jesus Christ, Your Son, Who lives and reigns with You in the unity of the Holy Spirit, one God forever and ever. Amen.
Close Menu