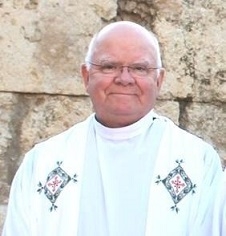 Michael was born in Philadelphia.  A member of St. Gabriel Parish, he attended Bishop Neumann High School, entered the Norbertine Order and was vested with the white habit on 1961-08-28.  He was ordained to the priesthood on 1970-05-16.

Michael earned his M.A. degree in History from Loyola University in 1972 and an M.A. degree in Religious Studies from Villanova University in 1973.  For many years he taught at Bishop Neumann High School and was appointed Principal in 1992 and President in 1993.  In addition to his ministry as a teacher he served as parochial vicar of St. Gabriel Parish and became pastor in 2000 serving in that position until 2010.  In 2010 he became pastor of St. Norbert Parish in Paoli and continued to minister and serve faithfully the parish community there as he had done in his previous assignments.  Throughout his life he remained a faithful and loyal son of Ireland.  For a number of years he marched in the annual St. Patrick Parade in Center City Philadelphia proud of his Irish heritage.