Ukraine: From Evil to God’s work of Grace

Fr. Karel Stautemas, O. Praem. tells the story of his many trips to Ukraine on his mercy missions. 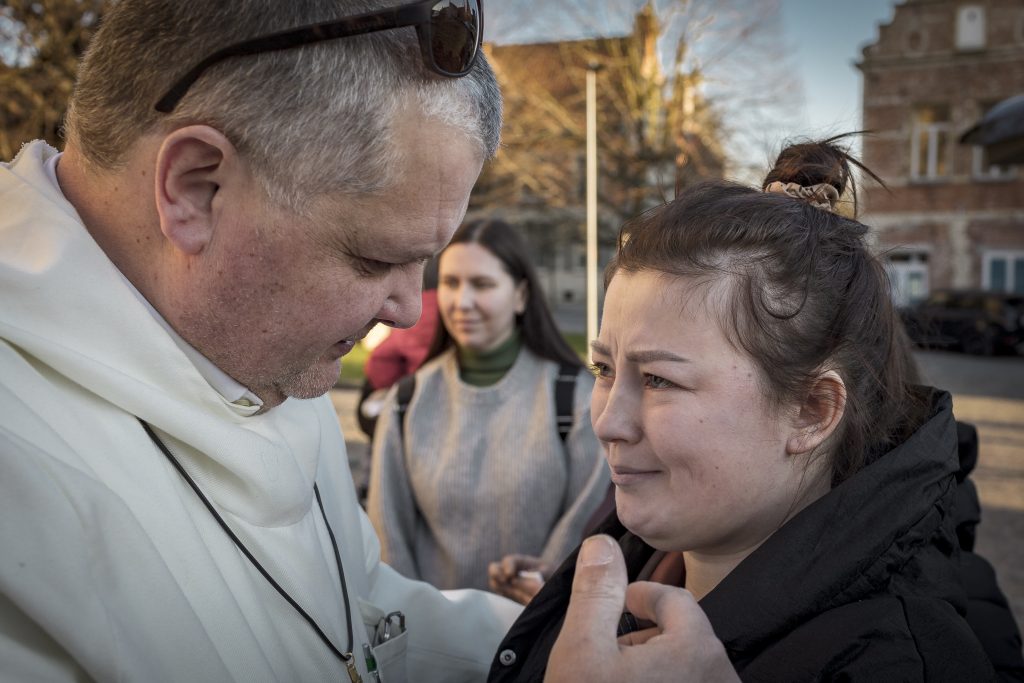 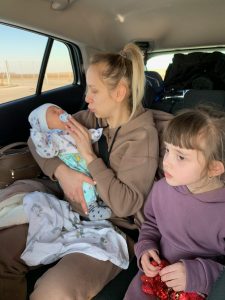 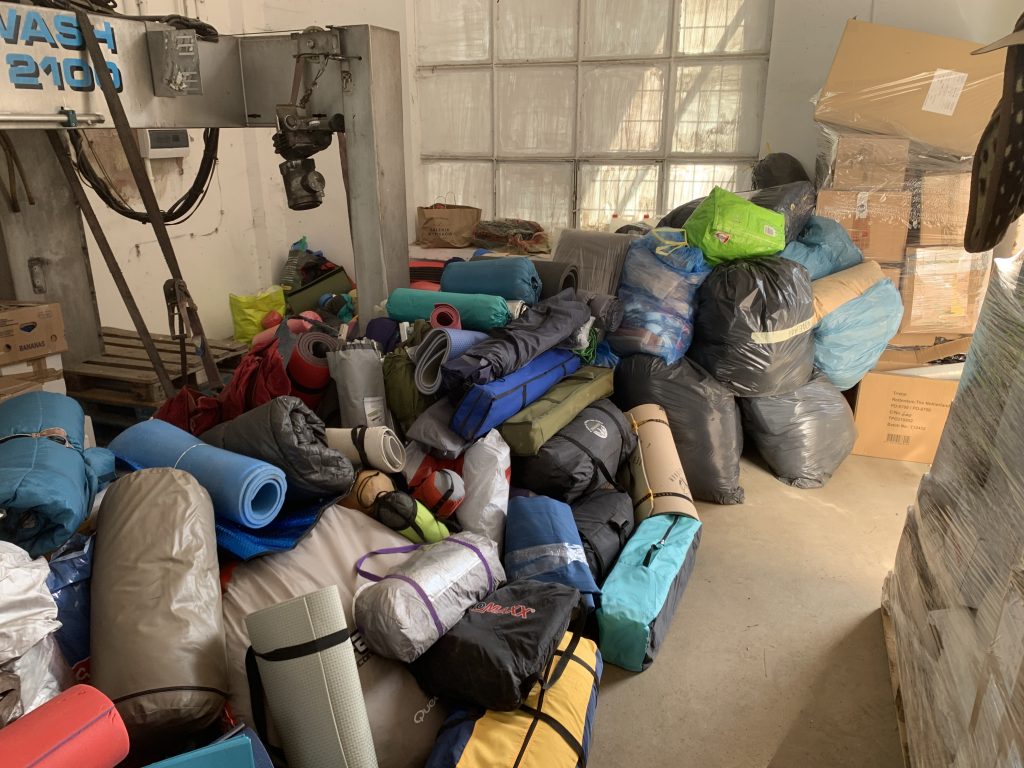 To summarize the trips to Poland/Ukraine. The trips to Ukraine has expired as follows: At one point I received a message via my confrère Father Johan, whether I did not want to bring goods to Ukraine? He knew someone in Ghent and who had a lot of goods to bring them to Ukraine. I looked at my agenda and decided, yes, I can have certain meetings postponed and so I left very quickly the next day for Ukraine with medical and emergency supplies and dry food and so on. The intention was to go for.

Normally I would have crossed the border to Lviv in Ukraine,  but because of a message that came in, that it was too dangerous one and two in coming back to Ukraine/Poland, there was a 4-day traffic jam. I’d better wait in the hotel at the border, for the refugees. But pretty soon I received a message to pick up other people at the station in Przmyle on the Polish border. They received a photo of me and I received a photo of them, so that I could immediately and fairly quickly bring the right people to Belgium.

I was then able to leave for Belgium with 6 people, so especially women and children of all ages, yes, from small children to all children who are 16 years old. A grandma who was completely alone. I noticed quite quickly that in Grimbergen near the old boy scouts the idea also grew to support this initiative, in such a way that we were able to start a second trip quite quickly a few days later. Back to Poland then to deliver relief goods, medical goods and food on the one hand and came back at the same time.

On this second trip we brought back women and children and I had the help of Bruno de Cuyper who had just been a deacon of the parish Merchtem and he drove the bus back to Grimbergen. I gave up my chair for a girl from 15 year old, to be able to bring her to Belgium. So I stayed there for the rest of the week. On the third trip that would come from Grimbergen and that would then be a convoy of 7 cars with trailers towards the Polish border. In the meantime, I rented a branch a wagon in the airport of Krakov drove it back to the border in Przmyle  to take people somewhere in Poland, where they have the forests. I also officially registered as a volunteer driver, in such a way that I could and was allowed to take people with me. And so I did a trip from the border to Warschau with a mother with a month-old child and another sister with two more children, a 550 km trip. And then I came back to Krakow.

I went to the Norbert sitters in Krakow and I was very well received there by Mother Priorin and sister Dorothea, but also by the other sisters. I was even preceded later to celebrate a Eucharist. I was able to stay there. I felt at home there too. The hospitality was really great for which huge. Many thanks to those sisters in Krakow. I also learned later that they would also take in refugees from Ukraine.

Meanwhile, the group of the boys scouts of Grimbergen had also arrived in Krakow.

After the third trip, we are organizing another convoy with two cars. With the same idea how the refugees pick up and deliver relief goods at the border at the same time, which will then be crossed over the border. And in the end, it took a little less than a month where we didn’t do anything because of practical works that also had to be done in Grimbergen.

At the end of June we organized the last trip for the time being, so actually. In the end, it became 5 tours (Belgium – border of Polen/Ukraine and back = 4000 km). It is important to note that 98% of all refugees live and live with Ukrainian families. That is very important, one for the language and two also mental health. Those are two important things that I had put first in the beginning. If we brought those People to Belgium.

Meanwhile, there was a very big solidarity campaign here and there in various parishes. We received a huge amount of money from People, which allowed us to purchase those relief goods, which allowed us to pay for the hotels, which allowed us to pay for the transport costs and at the same time, we can now fully equip two second-hand ambulances and those will in the month of July, direction Ukraine. And at the same time, there will be money left for a school in a Chernihiv vision to ensure that all windows are restored so that the children can go back to school in September. This is very important, because in October, silently freezes begin to freeze there too.

You understand that such a company cannot and should not be in sole proprietorship. I surrounded myself from the first trip by people who were very skilled. I am just thinking of Frank Meysman, who has arranged all the hotels. Our Ukrainian contact Elena did a great job. Also  Leo De Bock, who took care of the communication. So that everything and everyone was well informed. And Bart Van Humbeeck, who organized everything from the boy Scouts here in Grimbergen to be able to collect all goods and send them along with the various convoys on time.

I would also like to thank the hotel in Klettbach (Erfurt) in the vicinity of heritage the Jäger family who have always opened up a hotel without generating extra profit. And as well as the Norbertine sisters in Krakov are cracking for the fantastic hospitality. I enjoyed there, as well as 1 big chapeau for the Polish government and for the Polish people who have done everything to accommodate the Ukrainian refugees, coordinate it. It was admirable, heartwarming. How many people from different European countries were present at the border to help the refugees?

Of course, I would also like to thank my own confrères of Grimbergen abbey, because, yes, they have had to keep the abbey straight in my absence. And they were also the support I got. Of them has also been very warm and meaningful.

For myself, this experience made these tours a deep impression, both personally on a spiritual level, but also on caritas level and I needed it somewhere too. After the last year of intensive work for the construction of the microbrewery in Grimbergen. What was linked to financial material contractual matters. It was heartwarming to be allowed back and be able to do something for people.

And, let’s pray for the Ukrainian people. Let us also pray for peace for rapport. And it is likely that compromises will have to be made in the future. Do we want to keep peace in Europe? But before that, other people are much wiser than me to arrange this. We can only pray for people to rise up to arrange this in a grown-up, humane manner, in all righteousness, towards everyone.

Peace and all good. 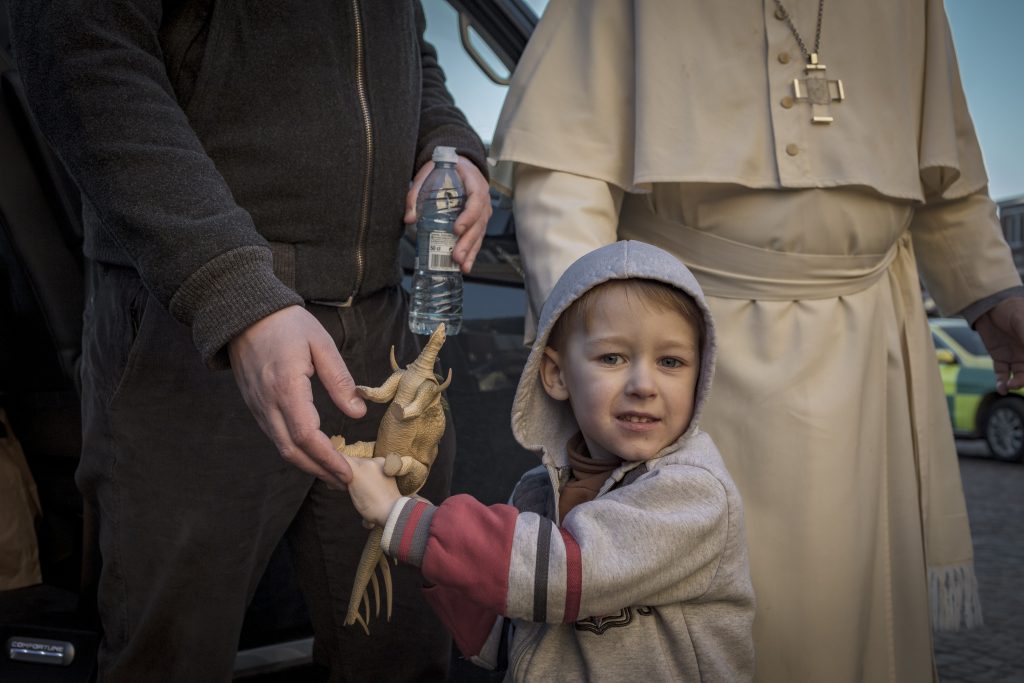 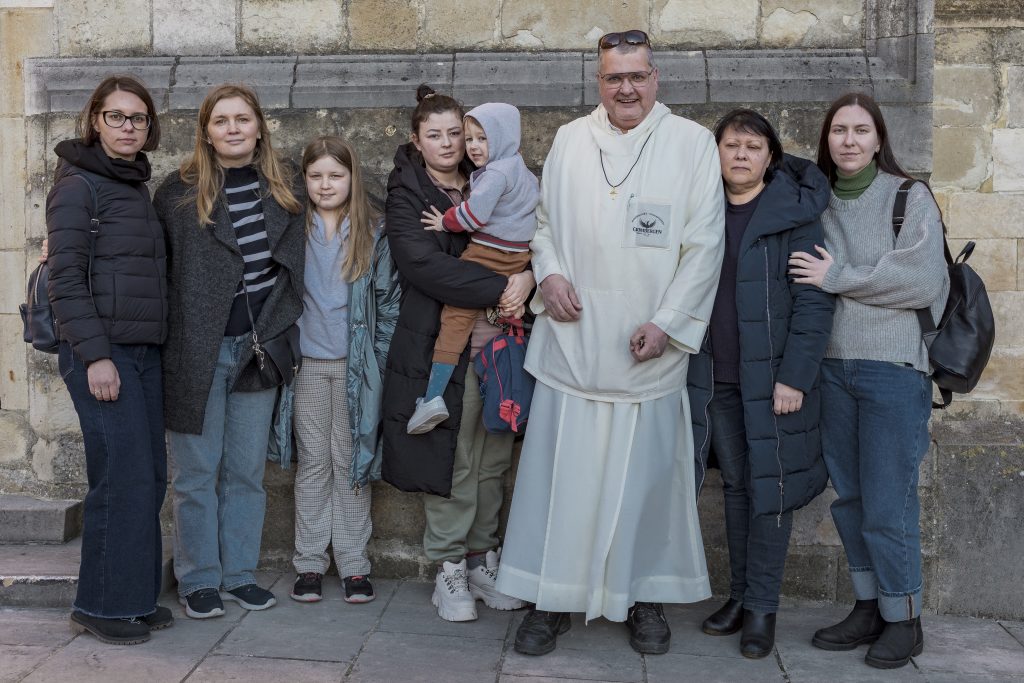 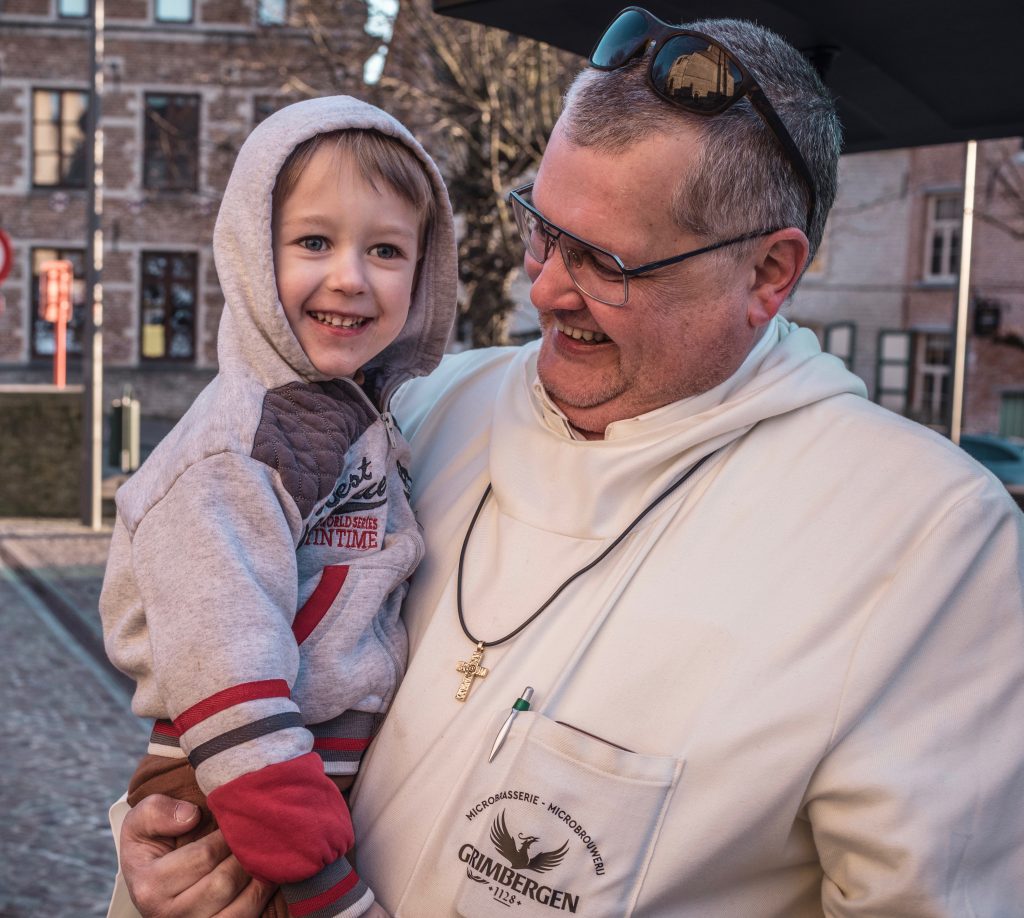 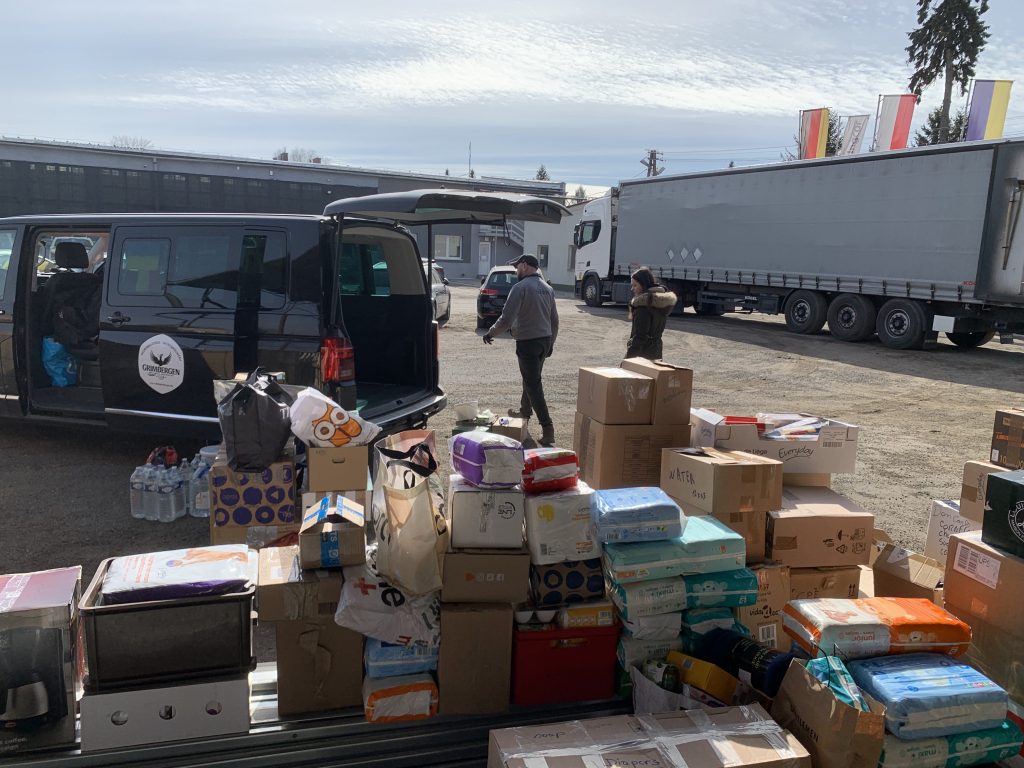 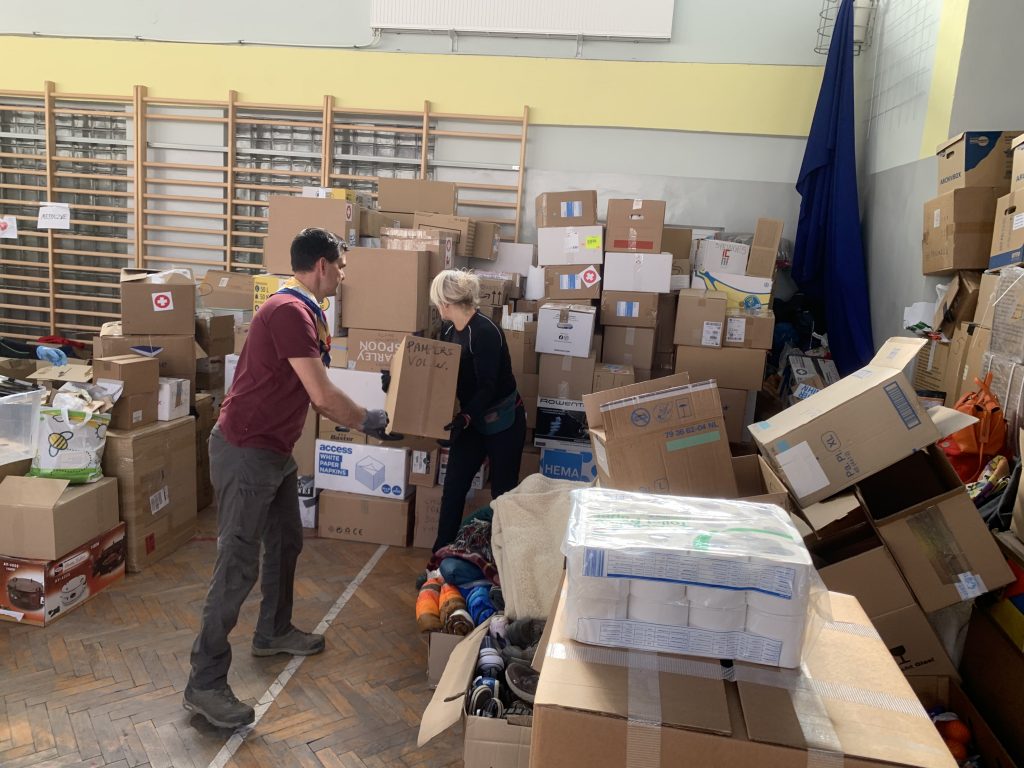 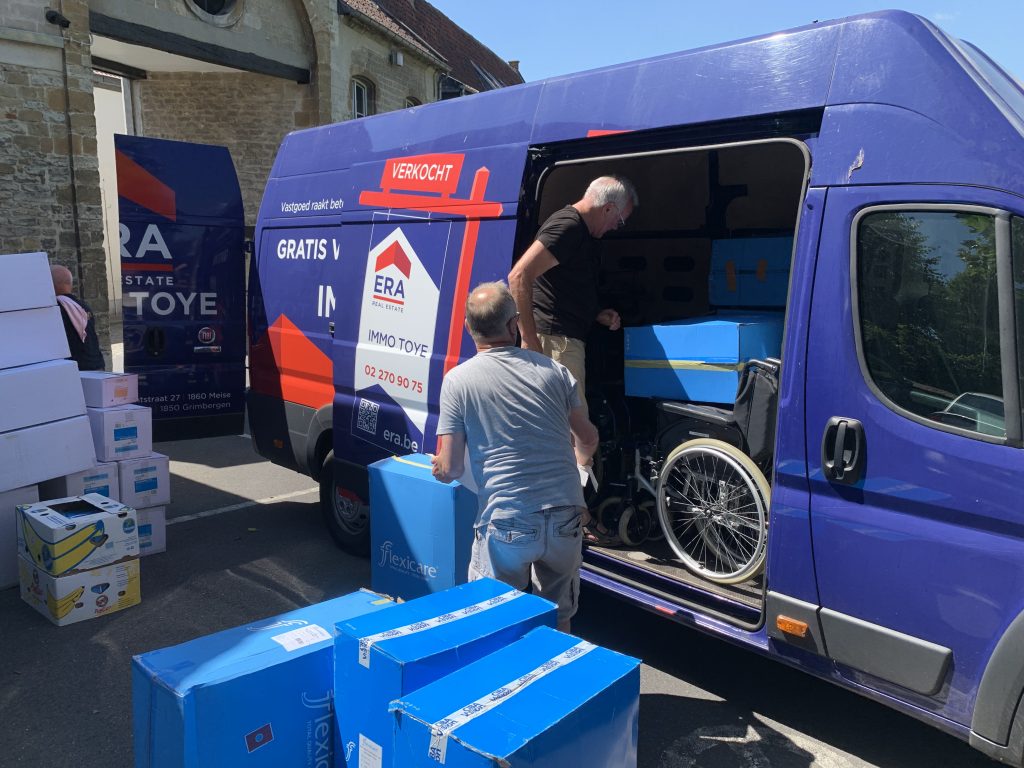 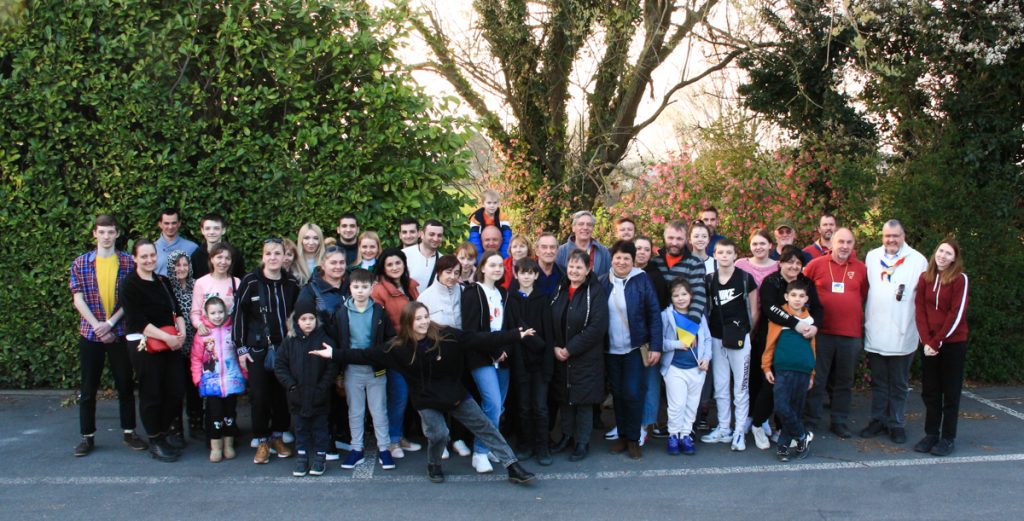